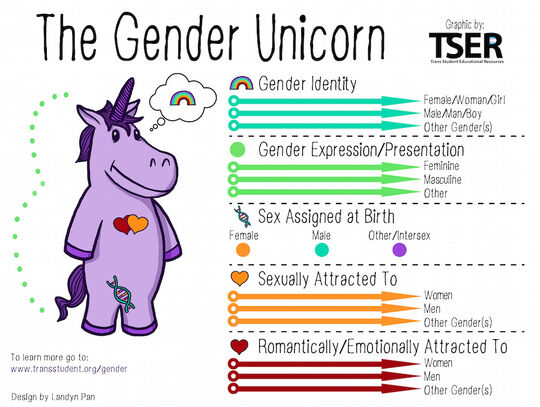 Gender is a unicorn! Not really (maybe), but our friend up there helps us break it down into its base components. It is important to know that gender isn't any one thing, it is all those things added together to make our identity. It is also important to understand that each one of those individual components (gender identity, gender expression, etc) exist independently from others. That means we can't know someone's gender identity based on their sex assigned at birth. We can't know someone's sexuality based on their gender expression. They all influence each other and added together make up our gender, but it is less like combining five colors to get one and more like painting a picture with five contrasting colors to create an image of who you are!

Before we get into it, we'll define the difference between sex and gender, because they are often used interchangeably. This is also how we'll define them here for the purposes of educating and they may be used differently in other places or contexts.

This is our brain's internal sense of what our biological sex should be. Gender Identity is what gives us our sense of being male, female, or something in-between or outside that binary. Gender identity, like everything else here, is a spectrum that can be expressed in many unique ways. It is also an immutable characteristic which is believed to develop as young as three years old.

It is important to note that we all have a sense of gender identity, just like we all have a sense of balance. Then just like with balance, it isn't something we really think about until we find ourselves off balance. This means that transgender people often feel a sense of being out of balance their entire lives or until they can correct their bodies through identity reclamation, hormones, or surgery. This is also why it sometimes remains invisible to cisgender people, because a cisgender person's gender identity aligns with the sex they were assigned at birth and they often never feel off balance. One thing to keep in mind about gender identity is that it doesn't change, but sometimes it takes us a while to either accept it or figure it out. Some people will be aware they are not the gender they were assigned at birth at a very early age and some people take until puberty or longer to realize it. Some people feel life devastating pain because of the mismatch between the brain and body and others don't. While there are many ways for it to express in people (depression, anxiety) and for them to deal with it (hormones, surgery), there is no right way, there is only a right way for each individual. That means someone who was assigned male at birth and has known they were female from a young age, isn't more valid than a person in the same shoes who took longer to figure it out. On the same token, a person who's had surgery isn't more of a woman or man than a person who hasn't, because the way our brain identifies is more important than anything we are born with or have had done to our bodies.

It is also important to understand that someone's gender identity doesn't say anything else about them, except what their biological sex should be. If a person had a female gender identity, that doesn't mean they will play with dolls as a kid, wear a dress as they grow up, become a nurse as an adult, and give birth to two kids. It only means that they will prefer female pronouns and for people to accept them as female. As for the rest? They are free to live their life, play with what they will as kids, wear what they do growing up, pursue a job they want, and decide on what is right for them as far as parenting goes. They are not limited because of their gender identity into having to behave, think, or dress in certain ways.

(Unfortunately there is racism and sexism within society that tries to dictate and limit us based on those things we can't control such as race, sex, sexual attraction and gender. While we are still fighting for equality and to be treated equal and to be given the same chances to express ourselves and live our lifes to the fullest as everyone else, many people may still face discrimination or hostility. It should just be understood that while people in society sometimes try to limit other people because of their gender identity, your gender identity never limits you as a person!)

This is the socially defined behaviors, dress, or roles ranging from masculine to feminine. Where gender identity is internal, gender expression is external. There was an unfortunately long stretch of time where society said females had to be a certain way (receptive, emotional, empathic, submissive) and males had to be s certain way (assertive, logical, stoic, dominating). But the fact is that anyone can express themselves in any way. Feminine doesn't mean female and masculine doesn't mean male, so a person can be a very feminine male or a very masculine woman or a mix of both. Gender expression, like gender identity, is a spectrum and doesn't say anything about our gender or our sexuality. It is simply the gendered labels to how we like to dress and act.

A great example in understanding that gender expression can be removed from gender identity is Casey Legler, who is a female, male model. She has a purely masculine gender expression, but she identifies strongly as a woman.

That said, sometimes transgender people will dress and act more feminine or masculine to fit into the gender they identify with. This isn't always because they want to express that way, but rather they have to so people will accept them or so they can get treatment.

When we are born we are given a classification of male, female, intersex based on what our genitals more closely resemble at birth. It is important to know that in reality we are merely born as babies and it takes some time to grow up to realize who we are.

It is important to know that sex is a spectrum and there isn't always a clear divide between male or female. That it is possible, if very rare and unlikely, for people with XY genetics to develop as females and carry a baby to term.

A lot of people like to try to define sex by genitals or by ability to reproduce. While there is a clear binary in reproductive system, if we consider that people can be born without a functioning one or otherwise lose it through accidents/cancer, then it would be dubious to define someone's sex purely on that. Imagine if a woman had to have a hysterectomy, then afterward had to get all her documents to say neutered for her gender, that she wasn't welcome in female spaces anymore, that she had to use a special or other bathroom, and was told she was less of a woman. Nobody deserves that treatment. A trans woman may have a male reproductive system, but that doesn't make her less of a woman.

The only consistent things across all genders is how we self identify.

But it isn't so cut and dry like that. That is just to give you a basic understanding of sexuality and why gender identification is important in it. The truth is sexuality is a spectrum, like everything else, and who we are attracted to and how we identify can vary widely and be inside or outside of a binary.

It is also important to know that our sexual attraction is independent from our romantic attraction, but both follow the same lines. That means a person can be sexually attracted to certain people and emotionally to others. It means they could not have any strong sexual desire, such as with asexuals, and not because of a defect, but because of natural variance!

Another thing to keep in mind with sexuality is that it has a lot of catching up to do with gender. While we are beginning to understand the vast arrays of genders out there, we still struggle to define a woman dating a pre-operation trans woman as a lesbian relationship. We also struggle to not call a lesbian transphobic for not being attracted to trans women. Sexuality goes a lot deeper than an attraction to man, woman, or everything. It is an interplay of so many things that have more and less importance to people, such as, body type, gender identification, reproductive system, gender expression, so on and so on. The important thing to know is that it doesn't make you transphobic to not like a certain set of genitals. It does make you transphobic to say the reason you aren't attracted to someone is because they aren't the identity they claim they are.

Community content is available under CC-BY-SA unless otherwise noted.
Advertisement